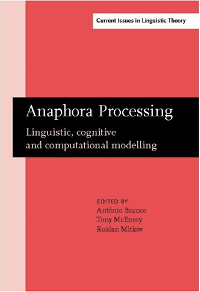 Pronouns without explicit noun phrase antecedents pose a problem for any theory of reference resolution. We report here on an empirical study of such pronouns in the Santa Barbara Corpus of Spoken American English, a corpus of spontaneous, casual conversation. In this paper we focus on some problematic subclasses of pronouns which could be analyzed as either referring to entities of various degrees of abstractness that were introduced by or implied in previous discourse, or as non-referential, including pleonastic.

« Mood and modality: Out of the theory and into the fray.
The Role of Ontologies in a Linguistic Knowledge Acquisition Task »